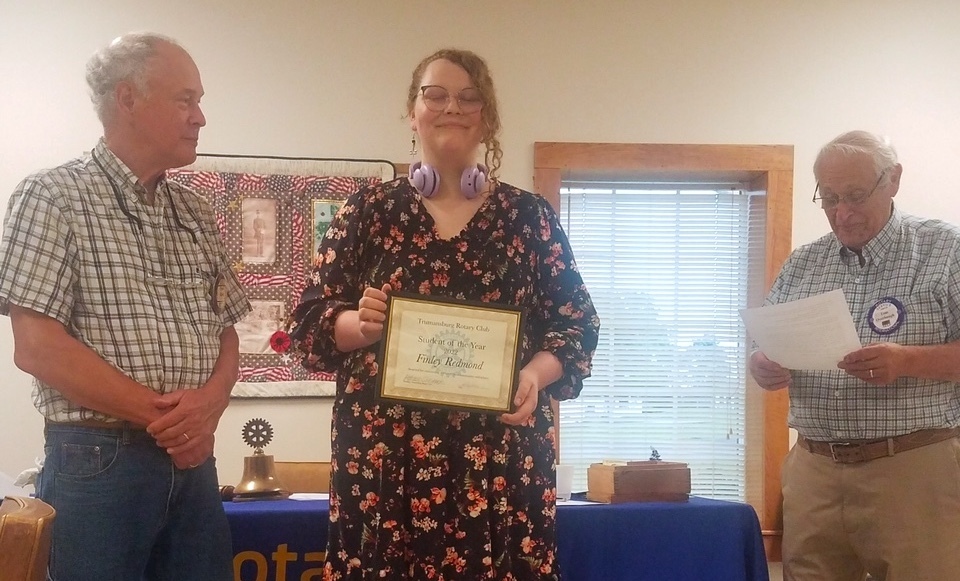 Throughout the 2021-2022 school year, the Trumansburg Rotary Club has, each month, been recognizing high school age students in the Trumansburg Central School District for their altruistic deeds.

Six students were honored this past school year: Findley Redmond in December, Madeline Brainard in January, Xander Dawson in February, Bryce Grove in March, Colby Grove in April and Carlos Blackburn Small in May.

According to Trumansburg Rotarian Frank Zgola, these students were identified by someone in the community for practicing the Rotary ethic of “service above self” and received recognition, a $50 gift certificate to a Trumansburg business of their choice and became eligible for the year end, random drawing, for $1,000.

Earlier this summer, that random drawing took place, and the award was given to Finley Redmond, who will be a senior at Trumansburg High School this upcoming school year.

Redmond has had some time to reflect about winning the award this summer.

“For me winning this award meant so much,” she said, “because I have been working against great odds for a very long time and this feels like one of the first moments that I've gotten validated for that work, along with that I want to use the prize money on my way to buying a car so I can make life easier for my mom as right now we only have one car which can make life difficult.”

Redmond, who said she is thrilled to be going into her senior year and begin the college application process, also offered some advice to any younger T’burg students who were curious about getting involved in volunteering and with the Trumansburg Rotary Club.

“I'd say to anyone who has eyes on becoming a rotary student that it is a great goal but remember that doing community service isn't all about the reward, also to be considered for voting you need to be vouched for by one of the existing members so if your interested talk to someone from the rotary club and see what you can do.”

Zgola added that the award program will be continued next school year and Trumansburg community can learn the award criteria at the tburgrotary.org website, find the nomination form and then be on the lookout for the next deserving student.